Core stability is a major benefit of horseback riding. The horse’s movement forces the core to engage so the rider can sit up on the horse’s back. There are a number of ways to work on strengthening a rider’s core so I’ll start with just a few.

If a rider has minimal core stability , meaning the rider cannot hold him or herself upright, moving the horse is often enough. Allow the rider to experience the horse’s movement in straight lines and stopping frequently for rest.

If a rider has uneven core stability, meaning the rider is weaker on one side, using the horse’s movement is also beneficial. Integrate circles and bends into the lesson, starting with the rider’s weaker side so their stronger side can support them (read: if the rider is weaker on the right side then circle to the right first). Single arm exercises can also help strengthen the core. Having the rider lift one arm up over head while keeping one hand on the saddle/pad/surcingle, then switch.

If a rider has good core stability, meaning the rider can hold him or herself up on the horse independently, exercises can focus more on increasing core strength and enhancing core stability. Two handed exercises, holding both hands off the horse for an extended count, working on 2-point and standing in the stirrups are all great exercises to work up to.

Do you have suggestions on what’s worked for your students? Is this helpful? I’d love to know your thoughts! 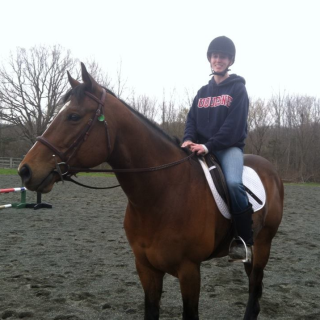 Hi there! My name is Lena and I am a PATH Certified Therapeutic Riding Instructor (CTRI) and Equine Specialist in Mental Health and Learning (ESMHL). Welcome to my arena!